The inviting shade of a group of walnut trees was the site of the little store which marked the beginning of one of Walton’s older communities. Situated in the extreme western part of the county, approximately nine miles from Monroe, the location is almost equidistant from each of the communities of Loganville, Social Circle, Covington and Conyers.

Legend says that Thomas Evans, who set up shop there long ago, referred to the crossroads spot as “the walnut grove.” Consequently, this was the appellation used when a post office was established.

Early postmasters and dates of appointment include

On January 8, 1895, the identity was changed from Walnut Grove to Walnut Grove First postmaster under the new form was

Between 1860 and 1870, wheelwright Ezra Hoffinan added a shop which also turned out cabinet work. Local brides coveted Mr. Hoffman’s useful pine chests, and, even today, two specimens of his skill are used and treasured by the Rockmore family.

In 1891, grape culture interested the citizens, who demonstrated the desire to keep pace with progress and new developments. Among the town’s prominent residents at this time were Thomas Evans, James W Carter, Captain J. T. Mitchell, Howard T. Shelnutt.

Soon after the turn of the century, J. B. Shelnutt built a rock store and S. H. and J. C. Brodnax established a bank. The town was incorporated in 1905 with limits of one-half mile from a point in the center of the road in front of the Brodnax Banking Company. By 1907, five granite buildings stood in Walnutgrove which then had a total of 125 residents.

S. H. Brodnax was mayor in that year, and J. B. Shelnutt, mayor pro tem. Jesse Robinson was clerk; J. C. Brodnax, treasurer; A. C. Clay and W A. Still, members of the town council. Among other names closely associated with the life of this town are Doolittle, Allen, Batchelor, Allgood, Byrd, and Harris.

Today, excellent paved roads cross in the heart of Walnutgrove, to funnel traffic efficiently in four directions: toward Monroe, Loganville, Conyers and Covington.

Thomas Evans’s walnut grove has long since disappeared, and highway construction has drastically altered and diminished the business area. But the community of Walnut Grove retains much of the appeal for which it is remembered, and many feel the fond attachment evidenced by the late Dr Grady E. Clay of Atlanta, who maintained a lifelong interest and concern for the well-being of his boyhood home.

(click the flag for our History in PDF format)

*Excerpted from Wayfarers in Walton by Mrs. Anita B. Sams, published in 1967.

Printed by The Historical Society of Walton County, Inc. for the 2005 Walnut Grove Centennial. 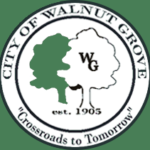